United Civil Party leider Anatol Lyabedzka ziet bepaalde herkenbare symptomen in de meest recente speeches van de tiran: “Lukashenka is at a loss. He has not put his thoughts in order, yet, and he understands by intuition that he has to adjust the strategy, but he has no completed strategy .He is loosing his former friends but he has not found new ones.” Minsk analysts paid attention to the new image of head of the state constructed in his interview to the Die Welt. Many of them recalled that a couple of months ago the social program of improving the Lukashenka’s image in the West was worked out at the Belarusian president administration. And they planed to start particularly with Germany. Policymaker Anatol Lyabedzka: “We have not yet completely comprehended the Lukashenka’s policy, but we are well familiar with this actor who is ready to play for any audience. Previously Alyaksadr Rigoravitch was eager to make the Germans like him by paying complement to Hitler in the German newspaper “Handelsblatt’. Today the situation has slightly changed.”

Coordinator of the Charter’97 civil initiative and former diplomat Andrei Sannikov recommends the West not to get flattered: “This is an attempt of an easy maneuver. And I can prove that by Lukashenka’s quotation” you must acknowledge me and that is all.” First and foremost, the West must not give up the principles of democracy and human rights. This is the only standpoint for the West to talk to Lukashenka. The talks are possible but only on firm conditions.” 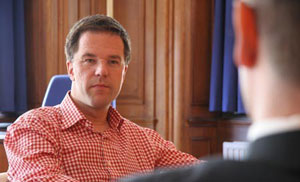