“The rain could be caused by processes similar to those on Earth: Moisture laden clouds pushed upslope by winds condense to form a coastal rain.” Lead author Máté Ádámkovics noted that only areas near Xanadu exhibited morning drizzle, and not always in the same spot. Depending on conditions, the drizzle could hit the ground or turn into a ground mist. The drizzle or mist seems to dissipate after about 10:30 a.m. local time, which, because Titan takes 16 Earth days to rotate once, is about three Earth days after sunrise. “Maybe only Xanadu has misty mornings,” he said.

Adamkovics first saw evidence of widespread, cirrus-like clouds and methane drizzle when analyzing data taken on 28 February 2005 from a new instrument on the VLT – the Spectrograph for INtegral Field Observations in the Near Infrared (SINFONI). Further images and spectra taken on April 17, 2006, by the OH-Suppressing Infra-Red Imaging Spectrograph (OSIRIS) on Keck II confirmed the clouds. Both instruments measure spectra of light at many points in an image rather than averaging across the entire image. By subtracting light reflected from the surface from the light reflected by the clouds, the researchers were able to obtain images of the clouds covering the entire moon.

Titan, larger than the planet Mercury, is the only moon in the solar system with a thick atmosphere, which is comprised mostly of nitrogen and resembles Earth’s early atmosphere. Because of its extremely cold surface temperature – minus 183 degrees Celsius – trace chemicals such as methane and ethane, which are explosive gases on Earth, exist as liquids or solids on Titan. Some level features on the surface near the poles are thought to be lakes of liquid hydrocarbon analogous to Earth’s watery oceans, and presumably these lakes are filled by methane precipitation. Until now, however, no rain had been observed directly.

“Widespread and persistent drizzle may be the dominant mechanism for returning methane to the surface from the atmosphere and closing the methane cycle,” analogous to Earth’s water cycle, the authors wrote.

Actual clouds on Titan were first imaged in 2001 by de Pater’s group and colleagues at Caltech using the Keck II telescope with adaptive optics and confirmed what had been inferred from spectra of Titan’s atmosphere. These frozen methane clouds hovered at an elevation of about 30 kilometres around Titan’s south pole.

Since then, isolated ethane clouds have been observed at the north pole by NASA’s Cassini spacecraft, while both Cassini and Keck photographed methane clouds scattered at mid-southern latitudes. Also in 2005, the ESA Huygens probe, released by Cassini, plummeted through Titan’s atmosphere, collecting data on methane relative humidity. These data provided evidence for frozen methane clouds between 25 and 30 kilometres in elevation and liquid methane clouds – with possible drizzle – between 15 and 25 kilometres high. The extent of the clouds detected in the descent area was unclear, however, because “a single weather station like Huygens cannot characterize the meteorology on a planet-wide scale,” said co-author Michael H. Wong.

The new images show clearly a widespread cloud cover of frozen methane at a height of 25 to 35 kilometres – “a new type of cloud, a big global cloud of methane,” Adamkovics said – that is consistent with Huygens’ measurements, plus liquid methane clouds in the tropopause below 20 kilometres with rain at lower elevations.

“The clouds we see are like cirrus clouds on Earth,” Adamkovics said. “One difference is that the methane droplets are predicted to be at least millimetre-sized on Titan, that is, a thousand times larger than in terrestrial clouds. Since the clouds have about the same moisture content as Earth’s clouds, this means the droplets on Titan are much more spread out and have a lower density in the atmosphere, which makes the clouds hard to detect.”


The scientists report their observation in the 11 October issue of Science Express, an online version of the journal Science: “Widespread Morning Drizzle on Titan”, by Máté Ádámkovics, Michael H. Wong, Conor Laver, and Imke de Pater. 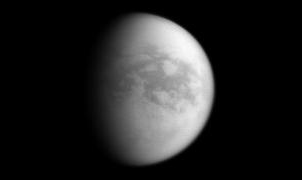