With a budget of €10 million, a series of community programmes involving culture, education, youth, sport and citizenship will be initiated throughout 2008. The aim is to create closer links between European peoples themselves and between their respective cultures. “Europe should be a community of people, of values,” he continued, praising as an asset the somewhat contradictory notion of many cultures being a single entity and yet separate. “We are living in one European home with a mosaic of pieces. The similarities are best seen from a distance, from other parts of the world,” he explained.

‘Chopin is not a threat’
Speaking about his own experience, Mr Figel said that before the EU’s enlargement eastwards in 2004, lack of knowledge and trust between the old East and West prevailed in Europe. “The old West did not look to the East as much as the East looked to the West. When my daughter went on a study trip to France some years ago, she was asked if we had running water in our homes, if she had ever seen a water tap,” he said. He added that the debacle over the “Polish plumber”- Western countries fearing that Eastern Europeans would flood their countries to take their jobs and dump wages – seemed to be more based on “fear of the other”, than on actual economic considerations. “Chopin is not a threat”, Mr Figel said jokingly, referring to the Polish 19th century composer.

“Enlargement was part of the solution, not the problem. Enlargement made the Union more European”, the commissioner continued, although admitting that there is still distrust between groups in the EU of today, shown in the discrimination against Roma in many parts of the bloc, or in the rise of extremist, xenophobic politics.

Religious dialogue
The commission’s initiative to place the rather abstract notion of culture at the heart of European politics follows some tumultuous years of clashes between different ethnic and religious groups both in Europe and between Europe and the rest of the world. “After enlargement, and in times of globalisation, in times of growing migration, so-called ‘multi-culti’ realities are very visible,” Mr Figel said, using a popular German expression for multi-ethnic communities. “And in many cases we have seen difficult, problematic or even conflicting expressions of this,” he continued, referring to the uproar in the Islamic world in 2005 caused by a Danish newspaper’s decision to publish of drawings of the prophet Mohammed.

Several European officials have since called for a “completely new dialogue” between the EU and the Muslim world. Others argue that dialogue is being too lenient towards those who do not respect the freedom of expression. “Dialogue is not a sign of weakness, but of maturity”, Mr Figel said by way of reply. Taking an example, he said that the aim of such a dialogue would not be to play “the good guys” while pointing the finger at Muslims. 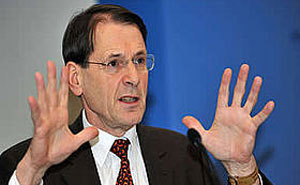