“The holy grail of current exoplanet research is the detection of a rocky, Earth-like planet in the ‘habitable zone’ — a region around the host star with the right conditions for water to be liquid on a planet’s surface”, says Michel Mayor from the Geneva Observatory, who led the European team to this stunning breakthrough.

Planet Gliese 581 e orbits its host star – located only 20.5 light-years away in the constellation Libra (“the Scales”) — in just 3.15 days. Being so close to its host star, the planet is not in the habitable zone. But another planet in this system appears to be. From previous observations — also obtained with the HARPS spectrograph at ESO’s La Silla Observatory and announced two years ago — this star was known to harbour a system with a Neptune-sized planet and two super-Earths. With the discovery of Gliese 581 e, the planetary system now has four known planets, with masses of about 1.9 (planet e), 16 (planet b), 5 (planet c), and 7 Earth-masses (planet d).

The planet furthest out, Gliese 581 d, orbits its host star in 66.8 days. “Gliese 581 d is probably too massive to be made only of rocky material, but we can speculate that it is an icy planet that has migrated closer to the star,” says team member Stephane Udry. The new observations have revealed that this planet is in the habitable zone, where liquid water could exist. “‘d’ could even be covered by a large and deep ocean — it is the first serious ‘water world’ candidate,” continued Udry.

The gentle pull of an exoplanet as it orbits the host star introduces a tiny wobble in the star’s motion — only about 7 km/hour, corresponding to brisk walking speed — that can just be detected on Earth with today’s most sophisticated technology. Low-mass red dwarf stars such as Gliese 581 are potentially fruitful hunting grounds for low-mass exoplanets in the habitable zone.

Such cool stars are relatively faint and their habitable zones lie close in, where the gravitational tug of any orbiting planet found there would be stronger, making the telltale wobble more pronounced. Even so, detecting these tiny signals is still a challenge, and the discovery of Gliese 581 e and the refinement of Gliese 581 d’s orbit were only possible due to HARPS’s unique precision and stability.

“It is amazing to see how far we have come since we discovered the first exoplanet around a normal star in 1995 — the one around 51 Pegasi,” says Mayor. “The mass of Gliese 581 e is 80 times less than that of 51 Pegasi b. This is tremendous progress in just 14 years.” The astronomers are confident that they can still do better. “With similar observing conditions an Earth-like planet located in the middle of the habitable zone of a red dwarf star could be detectable,” says Bonfils. “The hunt continues.” 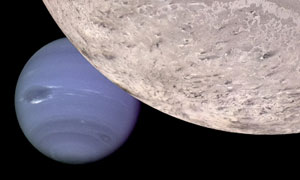