The solar system does not end abruptly past the planets. Beyondthe orbit of Neptune, the outermost planet (it orbits the sun at adistance of 30 AU, where one AU is the average distance of theearth from the sun), lies the Kuiper Belt, a region of many, smallicy bodies that extends out well beyond 130 AU. Although itresembles the asteroid belt between Mars and Jupiter in that itconsists mainly of many small objects, unlike the asteroid belt itsbodies are icy, rather than rocky.

Gerard Kuiper was one of the astronomers who hypothesized thisregion in the 1950’s to explain a particular class of comets, andhe argued that the objects were remnants of the very primitivesolar system.

About 1000 Kuiper Belt Objects (KBOs) are known, and modelssuggest there could be many tens of thousands of them, with sizesranging from meters to hundreds of kilometers. In addition, atleast four dwarf planets orbit in this region: Pluto, Eris, Haumeaand Makemake. Detecting KBOs is extremely difficult because theyare so small and do not reflect much light.

The TAOS project (Taiwanese American Occultation Survey) isdesigned to detect new KBOs indirectly, by monitoring large fieldsof stars and searching for occultations — when a KBO happens topass between a star and earth, blocking the starlight. CfAastronomers Frederica Bianco, Matt Lehner, Matt Holman, CharlesAlcock, and Pavlos Protopapas, together with a team of twenty-onecolleagues, have just published the results of 3.75 years of TAOSobservations, making this the first detailed study of occultationdata.

Although they have not detected any KBOs so far, even the nullresult allows them to refine the current models. They also concludethat KBOs are probably structurally fragile, and that the orbitalmotions of Neptune played a key role in the formation of the KuiperBelt as a whole. 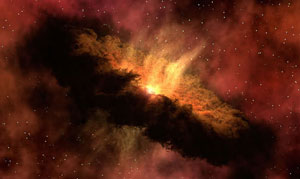