Without warning, a mystery object struck Jupiter on July 19,2009, leaving a dark bruise the size of the Pacific Ocean. The spotfirst caught the eye of an amateur astronomer in Australia, andsoon, observatories around the world, including NASA’s Hubble SpaceTelescope, were zeroing in on the unexpected blemish.

Astronomers had witnessed this kind of cosmic event before.Similar scars had been left behind during the course of a week inJuly 1994, when more than 20 pieces of Comet P/Shoemaker-Levy 9(SL9) plunged into Jupiter’s atmosphere. The 2009 impact occurredduring the same week, 15 years later. Astronomers who comparedHubble images of both collisions say the culprit may have been anasteroid about 1,600 feet (500 meters) wide. The images, therefore,may show for the first time the immediate aftermath of an asteroid,rather than a comet, striking another planet.

The Jupiter bombardments reveal that the solar system is arambunctious place, where unpredictable events may occur morefrequently than first thought. Jupiter impacts were expected tooccur every few hundred to few thousand years. Although there aresurveys to catalogue asteroids, many small bodies may still gounnoticed and show up anytime to wreak havoc.

“This solitary event caught us by surprise, and we can only seethe aftermath of the impact, but fortunately we do have the 1994Hubble observations that captured the full range of impactphenomena, including the nature of the objects from pre-impactobservations” says astronomer Heidi Hammel of the Space ScienceInstitute in Boulder, Colo., leader of the Jupiter impactstudy.

In 2009 Hammel’s team snapped images of the debris field withHubble’s recently installed Wide Field Camera 3 and newly repairedAdvanced Camera for Surveys. The analysis revealed keydifferences between the two collisions (in 1994 and 2009),providing clues to the 2009 event. Astronomers saw a distinct haloaround the 1994 impact sites in Hubble ultraviolet (UV) images,evidence of fine dust arising from a comet-fragment strike. The UVimages also showed a strong contrast between impact-generateddebris and Jupiter’s clouds.

Hubble ultraviolet images of the 2009 impact showed no halo andalso revealed that the site’s contrast faded rapidly. Both cluessuggest a lack of lightweight particles, providing circumstantialevidence for an impact by a solid asteroid rather than a dustycomet.

The elongated shape of the recent impact site also differs from the1994 strike, indicating that the 2009 object descended from ashallower angle than the SL9 fragments. The 2009 body also camefrom a different direction than the SL9 pieces. Team memberAgustín Sanchez-Lavéga of the University of the Basque Country inBilbao, Spain, and colleagues performed an analysis of possibleorbits that the 2009 impacting body could have taken to collidewith Jupiter. Their work indicates the object probably came fromthe Hilda family of bodies, a secondary asteroid belt consisting ofmore than 1,100 asteroids orbiting near Jupiter. 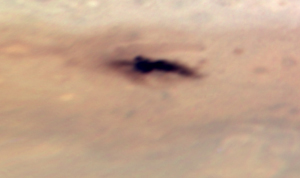 The 2009 strike was equal to a few thousand standard nuclearbombs exploding, comparable to the blasts from the medium-sizedfragments of SL9. The largest of those fragments created explosionsthat were many times more powerful than the world’s entire nucleararsenal blowing up at once. The recent impact underscores theimportant work performed by amateur astronomers. “This eventbeautifully illustrates how amateur and professional astronomerscan work together,” notes Hammel.

Occasional dark spots have appeared on Jupiter throughout thehistory of sky watching. Observing records of the planet are filledwith references to spots, including “white spots,” “peculiarspots,” and “well-defined spots.” Only a handful may have describedpossible Jupiter strikes.

In 1686, the Italian astronomer Giovanni Cassini reported a darkspot on Jupiter that was roughly the size of the largest SL9impact. Nearly 150 years later, in 1834, British astronomer GeorgeAiry independently reported a dark feature in Jupiter’s southernbelts that looked nearly four times as large as shadows cast on theplanet by the Galilean moons. Crude telescopes prevented skywatchers from probing the nature of those spots. 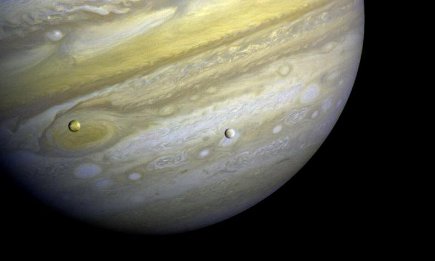 Juno is at Jupiter