The World Bank created a comprehensive

On the current state of Chinese higher education, the authorswrite that “rising educational standards and brisk growth intertiary education is rapidly increasing the numbers of skilledworkers and helping China move up the value chain. The growingskill base will facilitate a further shift in production fromlabor-intensive to skill-intensive activities and an increase inthe pace of innovation.”

“Indeed, just as in the 1980s and 1990s when hundreds ofmillions of unskilled Chinese workers joined the global labor forceas part of China’s “opening up” strategy, so too will tens ofmillions of tertiary-educated Chinese workers join the globalworkforce to significantly expand the global supply ofskill-intensive products. Indeed, the number of college graduatescould swell by 200 million over the next two decades-more than theentire labor force of the United States, [which is around 155million.]”

Investments into Education as %of GDP (World Bank)

Quality is improving, but a lack in university autonomyhinders innovation

University performance has also increased significantly. Out ofthe top 200 universities of the world, 11 are situated in China.Still, the World Bank states that “the quality of tertiaryeducation is a matter of concern, and employers are experiencing aserious shortage of skills. To address this shortfall, China needsto further accelerate governance reform in universities, givingthem greater autonomy while, at the same time, tightening ethicalstandards in research.”

“China will also have to rely more on innovations in ICT andpedagogical techniques involving the greater use of multimedia andflexible online training customized to the varying needs ofstudents. The traditional education approach of lecturing to largeclasses may need to be rethought, with institutions beingencouraged to experiment and given the autonomy to do so.” 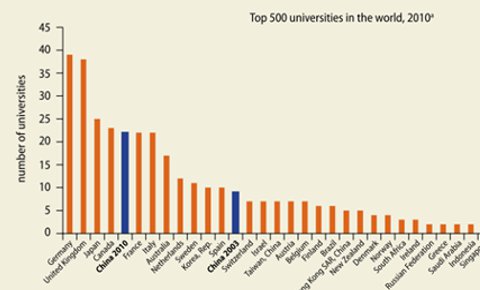 All these changes should be accompanied by a fundamentaltransformation of Chinese industry. A key strategy here will beturning industrial cities into innovative hubs. “Technologicalcapability is more likely to advance in innovative cities…Industrial cities can become innovative cities-such as Tokyo,Stuttgart, Munich, Seoul, Seattle, and Toulouse. But innovativecities do not have to be industrial, as Cambridge (U.K.), Helsinki,San Francisco, and Kyoto all show.”

Upgrading domestic industries and the country’s workforce iseven more important given an increasingly aging population. TheWorld Bank warns that “with rising life expectancy and with totalfertility at only around 1.5, the country is ‘growing old beforegrowing rich’. As the country ages, the labor force will peakaround 2015 and then start to shrink; and health and pension costswill escalate.”

“A smaller workforce, combined with higher dependency rates,puts a premium on deepening human capital to enhance laborproductivity, places additional demands on education and trainingsystems to increase relevant skills, and heightens the importanceof ensuring that labor is allocated efficiently.”

If you want to read more about how China is turning into a”hub of creativity”, click Utrecht Schoolof Arts (HKU)/Utrecht University professor GiepHagoort. 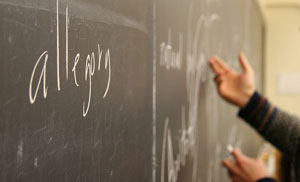 Student key to HE quality

“I was appalled to see that in the discussion...