The Netherlands is a higher education paradise for Englishstudents, Russ Thorne

Most of the 4 year programs would contain industry placements aswell. “It’s a real strength of the education system here. Studentsgraduate with a real understanding of industry, and it’s a shamethat’s disappearing from some UK universities.”

Dutch HE well placed in rankings

Another plus are small classes and more approachable lecturers.”We have a lot more contact time than any English university. Myfriends say that going to uni in England is like being a number:you see your tutor for an hour and that’s it for the week,” arguedEmma Booker, student at Nyenrode.

HAN University of Applied Sciences student, Taran Carter, alsotalks about his positive experiences with Dutch higher education.”When I was looking into universities I didn’t know where I wantedto go or even what I wanted to do. I read an article about UKstudents going abroad and thought, ‘Why not apply?’ I didn’t know alot about Holland: I’d been to Amsterdam and that was it!

The way the courses are taught is one of the things thatappealed to me. In the UK you don’t get much contact with tutorsand you’re not in the university that much. Here it’s a lot morepractical, there’s a lot of group work and I’m in most days. Ilearn more and do more. You get the chance to study abroad for ayear too, and that was another one of the reasons I came here.

I’ve been telling all my friends that I didn’t expect universityto be like this. It feels more like school: smaller classes andlots of group work; and we really get to know our teachers. It’snot like someone stands up in a hall and if you miss what they say,you’ve missed it.

I really thought I’d hate the first week but I loved it, meetingpeople from all over the world and hearing their stories. I’vesettled in more quickly than I thought; I worried aboutcommunicating but I’ve found it easier than most. If a Dutch personis speaking English to a Chinese person they can find it hard tounderstand each other, but as a native English speaker I know whatthey’re trying to say and I’m helping everyone out, which isgood.

I’ve made quite a few friends. In class we know each otherreally well because we spend so much time together, so we’rerelaxed outside of class as well and will go out for drinks andthings like that. On the first day the uni took everyone on thecourse to a restaurant, so right away I found people I had thingsin common with and people I could talk to.

I’d completely recommend it, simply because of the way living inanother country changes you – you grow up so quickly. I’d say justgo for it if you’re interested. I’ve felt comfortable from thefirst day. Dutch people are much more friendly than English people,too: you can just have a conversation with someone at the busstop.” 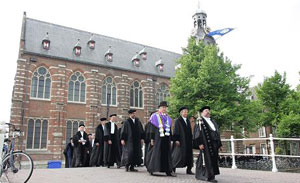