Canada placed second best in PISA’s reading proficiency tests in2000. The OECD conducted a follow up

On average, the reading proficiency increased by 57 points on atotal scale from 0 to 600. The greatest improvement of 62 pointswas realized by students from socio-economically disadvantagedbackgrounds. Yet, a significant gap of 50 points remained comparedto advantaged students.

By contrast, young immigrants scored 21 points lower at age 15and managed to test 2 points higher than native Canadians 10 yearslater. OECD researchers attribute this to the effective Canadianeducation and integration policies.

Naturally, further education between the first test at age 15and the subsequent one at age 24 significantly enhanced readingproficiency. University students improved their reading skills by56 points up from 596, while scores of people with a high schooldegree or less went up from 499 to 564.

“The bottom line: Learning does not end with compulsoryeducation. The fact that young people, regardless of theireducational attainment, can continue to acquire reading skillsbetween the ages of 15 and 24 shows that no one should feelresigned to inferior reading proficiency because of poor initialeducation,” the OECD concludes. 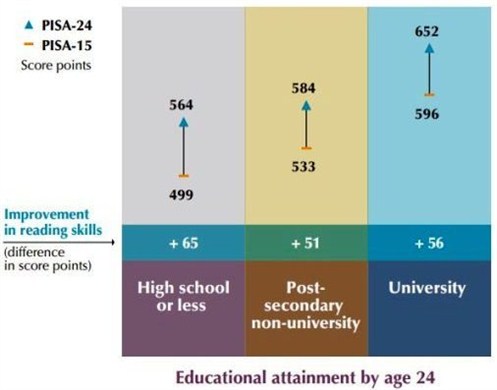 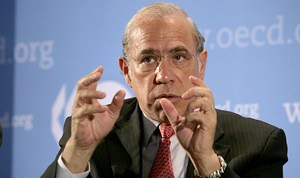 The PISA-acronym is a household name for comparing student...