“Open data is such a powerful idea, and Europeana is such acultural asset, that only good things can result from the marriageof the two”, European Commission Neelie Kroes (Digital Agenda) saidat the launch of CC0-waiver, that makes re-use without restrictionspossible.

Kroes: “People often speak about closing the digital divide andopening up culture to new audiences but very few can claim such abig contribution to those efforts as Europeana’s shift to creativecommons.”

From books to films

It represents 2,200 partner organisations, including all thegreat national collections such as the Rijksmuseum in Amsterdam,the British Library in London and the Kunsthistorisches Museum inVienna. 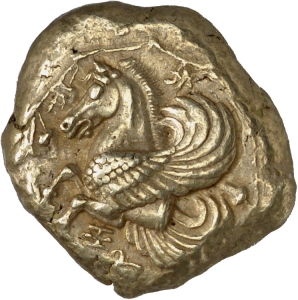 Turkish coin, 460-440 BC, Numismatic Collection of BodeMuseum, through Europeana

Europeana actively promotes the use and re-use of open data onthe European stage and recognises the importance of clarity in thiscomplex area. It has a

Away with closed data

Europeana’s move to CC0 is a step change in open data access.Releasing data from across the memory organisations of every EUcountry sets an important new international precedent, a decisivemove away from the world of closed and controlled data.

The change represents a valuable contribution to the EuropeanCommission’s agenda to drive growth through digital innovation. TheCommission is of the opinion that online open data can fuelenterprise and create opportunities for millions of Europeansworking in Europe’s cultural and creative industries. The sectorrepresents 3.3% of EU GDP and is worth over €150 billion inexports.

Linking the data together

Applying the CC0 waiver also means that Europeana’s metadata cannow be used in Linked Open Data developments. This holds thepotential to bring together data from Europe’s great libraries,museums and archives with data from other sectors such as tourismand broadcasting. The result could be a powerful knowledgegenerating engine for the 21st century.

Jill Cousins, Executive Director of Europeana said: “Thismove is a significant step forward for open data and an importantcultural shift for the network of museums, libraries and gallerieswho have created Europeana. This is the world’s premier culturaldataset, and the decision to open it up for re-use is bold andforward looking – it recognises the important potential forinnovation that access to digital data provides. This developmentmeans that Europe now sets the worldwide standard for thesector.”

Start-ups must turn the tide

In response to the alarming unemployment rates among youths,...