Global communication was revolutionized in the past decades bythe arrival of Internet. Bioengineering could undergo a similarrevolution, and take Internet to the next level. Researchers fromStanford took a promising step with a technology called “Bi-Fi”:the Biological Internet. The key to increasing the amount andcomplexity of information that can be sent between cells, is theinnocuous M13 virus.

M13 is a genetic messenger, and was chosen for its ability topackage and broadcast random DNA-strands without killing its host.A system built with this virus greatly increases the complexity andamount of data that can be communicated between cells. This leadsto a better control of biological functions within cellcommunities. Custom DNA messages can be wrapped within proteinsproduced by M13 and sent out to infect other cells. Once theyarrive in a new host, they release the packaged DNA message.

Cells naturally use chemicals to communicate, but this method ofcommunication is extremely limited in terms of complexity andbandwidth. “If your network connection is based on sugar then yourmessages are limited to ‘more sugar,’ ‘less sugar,’ or ‘no sugar'”explains researcher Drew Endy.

Cells engineered with M13 can be programmed to communicate inmuch more complex, powerful ways than ever before. The possiblemessages are limited only by what can be encoded in DNA and thuscan include any sort of genetic instruction: start growing, stopgrowing, come closer, swim away, produce insulin and so forth.

The researchers linked their M13-based system to a wirelessinternet connection that allows cells to send and receive messagesbut doesn’t care about the content of the messages.

The researchers were even able to broadcast genetic messagesbetween cells separated by a gelatinous medium at a distance ofgreater than 7 centimeters. “That’s very long-range communication,cellularly speaking,” explains Monica Ortiz, first author of thestudy.

The researchers believe that their Bi-Fi biological internetcould lead to the development of biosynthetic factories consistingof huge masses of microbes collaborating to produce complex fuels,pharmaceuticals and other useful chemicals. On the long term thistechnology might also be used for the regeneration organtissue.

Ortiz is not sure what the full potential of this new technologyis: “The biological Internet is in its very earliest stages. Whenthe information Internet was first introduced in the 1970s, itwould have been hard to imagine the myriad uses it sees today, sothere’s no telling all the places this new work might lead.” 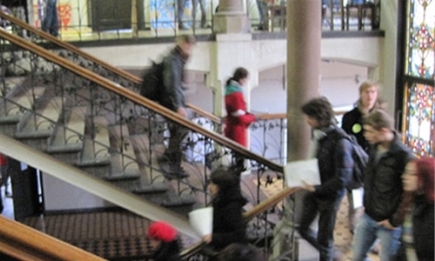 Which EU-country is really looking toward the future? The...