During the years 1954-1994, the Democrats ruled Congress andpart of that time also the Senate. After 1994  the need forprogressive policy development by independent organizationsincreased. “It was the time of the Newt Gingrich revolution”, VicePresident Ken Gude of the Centre for American Progress (CAP)explains in an interview with ScienceGuide, “that wasthe beginning of our Centre.”

Ken Gude: “Outside of government you have more time to developpolicy, in government you just execute policy, no time long termvisions. You can take more risk.  More time to invest inpeople, nurture the future progressive-policy makers.” The Centrefor American Progress has no formal tie with any political party,it does not support the Democratic Party, it wants policy that is”as progressive as possible.”

“Sometimes our visions are more progressive than those of theDemocrats, sometimes they’re not. When the democrats lost themajority in both Houses, we needed to make a mind shift. We neededfeasible pragmatic policies that could pass through both Senate andCongress.”

The other side of the Atlantic

“The big difference with thinktanks in Europe is that we do notget any government funding. This is the ‘great Americanindependence’. Many European foundations are linked to politicalparties: then you have less freedom to follow your own lead ontopics. The Centre for American Progress if for a large part fundedthrough contributions, also from international donors. We also havea CAP action fund that participates in debates and acts a politicaladvocate for several topics.”

“We are definitely not like a super PAC, we don’t doadvertisements or fulfill any major role as a political player. We aggressively defend our non-partisan status, we only careabout the issues not about party politics”

Tackling emissions via a detour

“It is a source of enormous frustration that little is done totackle greenhouse emissions . It is not part of the politicaldialogue but we are pushing to make it a topic, we work hard on itbehind the screens. This year we have developed policyrecommendations, hopefully for Obama’s second term, to be able totackle the rising emissions without the back-up of Congress.”

“We push it in alternative ways, through regional strategies forexample. Also through Federal policies that are not energy related:housing policy, agriculture, and transportation. As a result the emissions will be lowered without needing large politicalback-up.”

A degree at the ‘Romney university’

Gude does not want to break his non-partisan status by sayingthat progressive values are saver with Obama. But the Centre’s

“We stay within the rules; the eyes are on us, especially withregards to tax law. All activities we do are on purely on issues,not on persons. We purely analyze the policy proposals and what itwould mean to people: political education we call it.”

“We have pushed the Obama administration, we were very concernedon the issue of the debt ceiling. And we have a different tax planthan Obama. Our objectives to create the best progressive policyatmosphere: to stimulate progressive policy and tackle conservativepolicy. But no, we haven’t organized an Obama university, butduring his term we created a lot of material and research on theirpolicy of the last four years, so we know where theyare.”

You think this journal is real?

Scientific authors must be ware: the newest trick of... 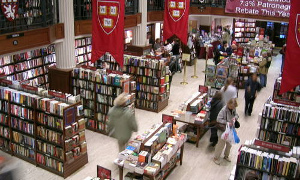 Why do professors all think alike