The UNICEF-report, Generation 2025 and beyond: the critical importance of understanding demographic trends for children of the 21st century, highlights several intriguing facts. The share and number of children living in low-income and lower-middle-income countries are set to continue to grow rapidly.

In 1990, roughly half the world’s children lived in countries of low or lower-middle income. By 2025, nearly two-thirds of children will live in these countries, with the proportion rising to almost 70% by 2050.

USA’s children on the rise 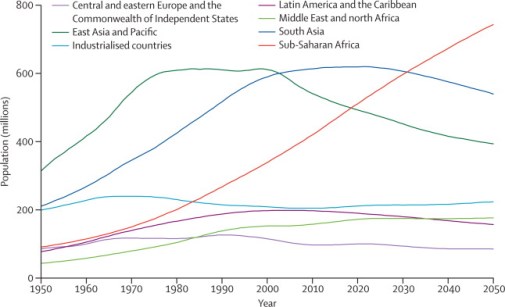 What implications for education?

The UNICEF-report states that planning for education, nutrition and health services must take full account of the projected demographic shifts. “To achieve universal primary education and other goals is more demanding in countries with fast growing child populations. In some sub-Saharan African countries, the population of school-aged children will double between 2010 and 2025; this has major implications for provision of education and other essential services. On the opposite side are countries with declining or stable numbers of school-aged children, which will not have this demographic pressure of growing numbers and can more easily achieve goals set for primary and secondary education.”

In The Lancet the reports’ authors formulate the big question behind the statistics: “What must be done to ensure that the 2 billion children set to be born between 2010 and 2025—who, on the basis of present trends, will mostly be born in the poorest districts, communities, and families of every region—get an equal chance to survive, develop, and reach their full potential?”