In every debate about the payment of high public officials, the same arguments come to the fore. Philosopher Teun Dekker (Maastricht University) studied these arguments across seventeen liberal democracies. “Politics without philosophy is blind, and philosophy without politics is impotent”, Dekker said at a busy presentation at the Brussels’ Campus of the Maastricht University.

The issue of how much a public servant should be paid, is as old as political philosophy itself. “In The Republic Plato already spoke of it”, Dekker said. “The problem is: we talk about the issue very badly, we talk in a fragmented way and there is a lot of yelling involved. Recently I spoke at a public hearing in the European Parliament and an fight practically broke out.”

“If we cannot explain how decisions are being reached, there will be a legitimacy problem”, Teun Dekker explained. “Therefore I tried to analyse all the arguments in a coherent, elegant fashion. The arguments in politics are like icebergs: a lot is implied by the arguments used.”

Teun Dekker then minutely dissected some of the arguments, for example: salaries for public officials should be low, because this guarantees their being ‘of the people’. “Switzerland has this logic and it results in the fact that most MPs are millionaires, since only millionaires can afford to take on a job with low payments.”

“It was fascinating reading your study”, Verhofstadt said in response to the publication, “Especially the peaceful demonstrations in Kenya, where protesters occupied the government building in response to the anticipated pay rise for MPs from $ 78.000 to $ 126.000, calling the MPs, ‘MPigs’ and illustrating that with real life pigs in front of Parliament.” 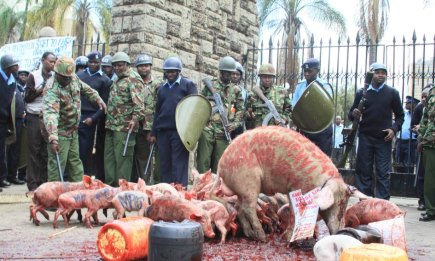 Protesting against pay rise for MPs with ‘MPigs’

Mr. Verhofstadt praised Dekker for his empirical approach and the impressive amount of political debates – more than 100 – that were used in the research. “Many debates on the payment of high public officials aim to reinforce the populist stance, not to correct it.”

“In real life there are many more arguments than those used in the study”, Verhofstadt continued. Still your analytic discourse evaluation can be a valuable tool to dissect an argument. Maybe it will lead to better justification of policy choices.”

Mr. Verhofstadt thought one should not  overestimate the practical use of political philosophy in politics. “It cannot replace the political decision making. Neither will it predict which arguments will prevail. The sole purpose of the analytical evaluation is being the referee in the debate. And just like in football the referee should not take one side.”

Sorry, we are not rational

“And what is equal pay for equal work? I consider the private sector very different from the public sector, so the term ‘equal pay’ should rather be replaced by ‘fair pay’.”

Verhofstadt continued on the question ‘what makes a good and effective public servant’. “When I entered politics, it was passion for change that drove me, not the pay at the end of the month.”