At the 3TU Innovation & Technology Conference in Eindhoven, Dirk Jan van den Berg (President TU Delft) expressed the fear that the technical universities will soon enter dire straits, as the so-called second and third-stream funding –investments from public bodies and from private sources- are likely set to decline in the next few years.

“This is not what you will see reflected in our annual accounts, since contracts cover more years. However, it tells you about the underlying trend in our research funding and as you can see there is reason to be worried.” 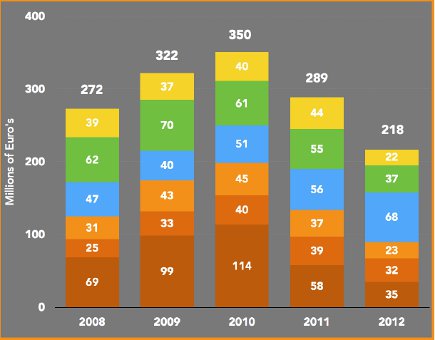 Acquired funding from the second and third-stream income

Until recently part of Dutch natural gas-income was used for investment into the knowledge economy. Until 2005 € 17 billion was invested, but this so-called FES-fund was liquidated in 2011. Van den Berg believes that the effect will really kick in this year and next.

“We are now processing the 2013 data and unfortunately the preliminary outcomes confirm these negative trends”, Dirk Jan van den Berg says. “This will have immediate repercussions on the number of PhD-candidates we can accept. A continued lower level of somewhere between €80-€100 million substantiates our earlier claim that the shift towards a fiscally based support scheme for R&D-activities in firms would decrease the number of PhD-students with about a thousand.”

“As a result we will witness a sharp drop in scientific output in the Netherlands. This is a pity because the open and transparent research system in the Netherlands is rated first in its class within the European Union. The top-sector policy will not make up for this loss. With the economy somewhat improving and with a strong fiscal support package, which we support, we hope that the company sector will come back at higher levels.”

Punch above our weight

According to Van den Berg, the only ray of hope is the European Union. “We have been extremely successful in attracting funds from the European Union, we really can say we are punching above our weight. We are optimistic about the opportunities we see in the Horizon 2020 program, though we are disappointed that the full cost principle has been abandoned. This implies that the cost coverage in European projects will be 15%-20% less compared to the FP7 programs. We therefore very much welcome proposals developed by the Ministry of Education, Culture and Science to at least partly fill this gap.”

In this highly volatile research funding climate, it would be utterly unwise to fiddle with the basic ‘first stream‘ funding coming from government, the TU Delft President thinks. “The 1st funding stream basically sets the conditions right in order to be successful in attracting research funds by hiring excellent researchers and teachers and by in investing in state of the art facilities.”

“People familiar with the workings of a university know very well that investments in research groups easily span timeframes of years and are in no way aligned with the current political cycle of about 2 years. So we make a strong appeal to stabilize the 1st funding stream, to take out the distribution based on market shares in education and to explore the opportunities of a capacity budgeting model.”

The village of Asterix

When it comes to innovation the 3TU Dutch  universities of technology are very well positioned to produce results, van den berg shows. The Innovation Union Scoreboard 2013 “clearly shows that we find ourselves in an interesting sphere of innovation leaders, starting out at the London Area, running through 3TU-territory, Belgium, Germany and ending at the Grenoble/Lyon-area in France. The issue I would like to raise here is whether our regional leaders sufficiently integrate this in their policies. Can they fight off the ‘village syndrome’, we all know from Asterix and Obelix: the world out there is full of evil Romans.”

“There is a looming tendency here that investments made from a regional perspective can be sub-optimal at a national scale. Some decisions made by regional authorities simply derail the profiling efforts of the Dutch university sector. I really advocate a regional policy focused on connecting rather than competing. Only than can we be open to the massive opportunities which lie at our doorstep.”