Last week, the World Bank published its yearly Global Economic Prospect. “Growth in South Asia strengthened in 2014. In India, export growth has been robust, and investor confidence has been bolstered by the election of a reform-minded government,” the report says. India is the main reason the economy in South Asia is bolstering over the last years. 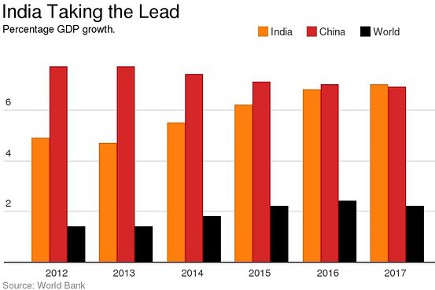 According to the World Bank, China will see a decrease in economic growth down to 6,8% in 2017 while India is taking the lead in a larger expansion of economies in the south of Asia. “The upturn was driven by India, the region’s largest economy, which emerged from two years of modest growth. Regional growth is projected to rise to 6.8 percent by 2017, as reforms ease supply constraints in India.”

As Narendra Modi took office as president in India last year, new reforms have helped developing the economy. “After several years of stalled progress, the newly-elected government has begun to implement measures to cut red tape, raise infrastructure investment, deregulate key parts of the economy, and shrink the role of government,” the report says.

Part of the structural reforms in India will be education. Vice-president Hamid Ansari recently underlined the need for academic reforms. “Higher education must be aligned to the country’s economy and to the needs of global market. Innovative and relevant curricula should be designed to serve different segments of the job market or provide avenues for self-employment,” Ansari said last week in Bangalore.

The development of India as one of the most important economies comes as no surprise. This year India will be partnercountry of the Hannover Messe, Europe’s largest technology fair. In 2014 this role was given The Netherlands, which were the Messe-focus country for the first time since 1991. Before the Dutch, Russia and China were the most recent partner countries of the Hannover Messe.

This week's On the Agenda. Why everyone hates Betsy...

This week's On the Agenda with student fees across...

This week's On the Agenda with academic freedom under...