In a statement on the challenges and opportunities for Europe now Gurria writes:

“Yet, in all but a handful of cases, the response of Europe’s governments has been tentative, at best: acknowledging the need to do more, while fearing the implications.

Some politicians fear the burden that migrants will impose on local communities and taxpayers. Others fear extremists masquerading as genuine refugees. Above all, many are scared of public opinion, which – for all the heart-warming scenes of welcome and support for asylum-seekers – remains hesitant and even hostile to the prospect of still more migrants from war-torn, troubled countries, especially if they practice a different religion.

European leaders cannot afford to be afraid. The refugee crisis is not one from which they can opt out. No magic wand will empower leaders to transport more than a million people back across the Aegean and the Bosphorus to Mosul and Aleppo, or across the Mediterranean to Eritrea, Somalia, and Sudan.

The reintroduction of border controls and the construction of fences may buy time for over-stretched countries, but no one can seriously expect to keep out people who are so desperate to move. Given the dire conditions in the countries from which they are fleeing, perhaps half of the asylum-seekers will qualify for residency under even the strictest rules. So, whatever the sensitivity or ambivalence of public opinion, European leaders will have to find a bold, coordinated, and unified response.

There are three challenges.

The first is to agree on a fair allocation of refugees within Europe; despite their vast numbers, these desperate people must be provided with shelter, food, and support. This will be difficult enough.

The second challenge is to start the process of integrating refugees into Europe’s societies and economies. Some refugees will find it relatively easy to find jobs. A university-educated Syrian civil engineer arriving in Munich will need to learn some German; but, once this is done, he or she is unlikely to have to wait too long before employers come knocking. Other asylum-seekers have lower levels of education, and many may well be traumatized by their experience of war and exodus. It will take time and effort to integrate them – and many voters will be skeptical of the process, especially given that successful integration or assimilation will not come cheap.

However, paying the price to accept and integrate today’s asylum-seekers could reap significant benefits for the Europe of tomorrow. Our work at the OECD shows that migration, if well managed, can spur growth and innovation. Unfortunately, in the past, migration has not always been well managed: migrants have been concentrated in ghetto-like conditions, with few public services or employment prospects.

Even so, the evidence from the OECD’s 34 member countries is that immigrants generally pay more in taxes and social security contributions than they receive in individual benefits. Today, we’ve released a policy brief on the current refugee crisis. Put simply, Europe needs migrants and the new skills they can bring. Otherwise, as its population falls, it will struggle to pay pensions and health-care costs in the future (already in the decade to 2010, immigration accounted for 65% of the increase in the EU workforce).

Many will argue that refugees who lack the skills that the economy demands will be harder to integrate than other newcomers. Perhaps so. But, because we now know a great deal about what has worked in resettling migrants, we can hope to avoid the mistakes of the past – not least by documenting and sharing the experiences of the countries that have managed migration well.

This brings us to the third, and greatest, challenge that European leaders have to overcome: the fear of migrants. Integration is a precondition for the public acceptance of future legal flows. The presumption is that “we” are integrated, whereas “they” are not. And yet almost everyone has a migrant somewhere in their family tree, often not many generations back. The distinction between “us” and “them” is not as sharp as we might assume.

None of today’s leaders expected to face a human tragedy on the scale of what we now see in the Mediterranean and across Europe. But how they respond will determine how they are judged by their citizens and by history.

This is not a numbers game. Leaders should shift their attention from questions concerning “how many” and “where” to the “what” of the crisis – namely, what they should be doing to integrate these newcomers into their societies and economies. They must exercise their leadership to convince the public that migrants – above all, those most in need of protection – give more than they take. In this moment of crisis, we should all heed the words of the Mexican novelist Carlos Fuentes: “Recognize yourself in he and she who are not like you and me.” 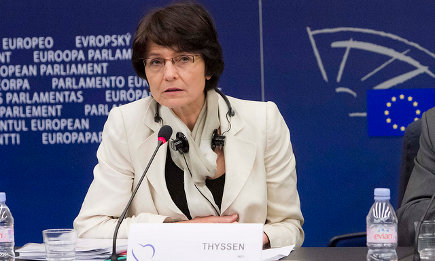 The EU presents its first ‘Skills Agenda’, “because in...