“At the start of the seventies the very first president of his homeland, Habib Bourguiba, began to display more and more autocratic traits. My father was politically active which unfortunately was not to be recommended under the increasingly dictatorial constellation. He was told in no uncertain terms that he was no longer welcome in his native country.”

“Like many revolutionaries, Bourguiba’s start was hopeful. After shedding the French colonial yoke in 1956 he created a constitution that safeguarded the rights of Tunisian women. He prohibited polygamy, while most Arabic countries still allow it, and he legalised divorce. To emphasise his secularity he drank orange juice on national television during Ramadan. The message was clear: believe if you want to, but work goes on.

In the seventies Bourguiba takes a turn for the worse. His arrows are aimed to the left. The United States, then a loyal ally, would have had no problem with his hunt for the communists and other dangers like islamists. My father by the way was neither. Therefore Rashid al-Ghannouchi, who is the leader of the Ennahda movement to this day, was imprisoned. After years of exile in London, he only returned three years ago.”

“He could return partly thanks to street trader Mohammed Bouazizi, who torched himself in December 2010 because he could no longer stand the humiliation. Anno 2014 Tunisia has become the poster child of the Arab spring: THE example of a successful democratic change in a region dominated by autocracy. Libya and Syria are getting badly out of hand and in Egypt the same old clique is wielding power like it always has.

Not in Tunisia … or so it seems. Recently the first truly democratic elections took place in that cradle of the revolution. The outcome: no party holds the absolute majority and given Tunisa’s history that is a good thing.

In Europe, in the meantime, we celebrate the fall of the Berlin Wall twenty-five years ago. It was the first swallow that, contrary to the saying, did most certainly make a summer. In Tunisia, despite the generally agreeable climate, the real summer is still a long way off. A recent World Bank report rightly qualified Tunisia as the potential tiger of the Mediterranean that still has to make good on his promise.”

“Europe especially can help this still shackled tiger break free. Our continent would do well to receive the olives and textiles as well as the appetite for revolution with open arms. This begins with opening up our market. If we manage to economically integrate the countries east and south of Europe, we gain 250 million consumers. I’m sure you’ll have no problem with that.

Now that Europe and its neighbors are again, just like 25 years ago, facing a moment of fundamental change it’s crucial that we keep on investing in our values, democracy and citizenship. Not only because it’s the only way to keep the greatest peace project on this planet – called the European Union – floating. But also because our friends from the east and the south have recently stood up for exactly these values. Now is the time to reach out and create alliances that will strengthen our old and new democracies with the means of … yep, you guessed it right … CULTURE.” 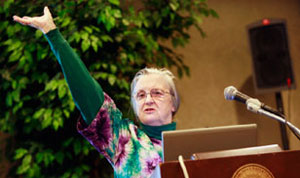