Researchers estimate that by the end of 2011 one third of allscientific articles will be available for free online via OAplatforms. Two main forms of OA have evolved: Green OA, on the onehand, where the author simply makes papers available in repositoryonline archives; on the other hand, Gold OA where the author pays aprofessional agency to properly publish articles online togetherwith peer reviews.

Boom of Green and Gold OA

Current star of the OA community is

Bo-Christer Björk from the Hanken School of Economics in Finlandestimated that in 2009 Gold OA publishing had a market share of7,7% growing at an annual rate of 0,5%. His research showed thatsince 2000 the number of Gold OA journals grew on average at 18%per year with 30% yearly growth in the number of scientific OAarticles.

Yassine Gargouri, postdoctoral researcher at Université duQuébec à Montréal (UQAM), conducted research into the field ofGreen OA and found that in 2010 its market share was around 21%.Bringing these findings together almost 30% of all scientificarticles are available for free online with Gold OA representing1/3 and Green OA 2/3.

Meanwhile, Derk Haank, CEO of the well established publisherSpringer, remains critical of the current trend in OA. He doubtsthe OA market share estimates and states that he “expects [them] toremain between 5% and 10% at a maximum.” These doubts may be welljustified in some cases. Especially for Green OA, numbers can beoften deceptive as it is difficult to distinguish completescientific articles from short incomplete excerpts in onlinearchives.

Advocates of OA see these growth numbers even more critical witha slightly different angle. Stevan Harnad, cognition researcher atthe British University of Southampton, says that “these growthrates are portrayed as dramatic, but they are not dramatic at allif the goal is 100% open access.” For the sake of knowledge sharingand Isaac Newton’s ‘standing-on-shoulders-of-giants’ OA has to growmuch more and faster. 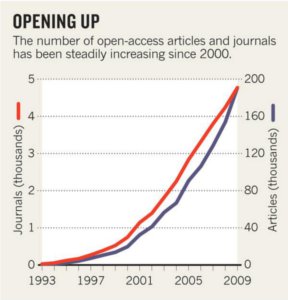