Sebastiaan Pleus, a 4th year student of HvA’s AMFI, experienced a “completely new thing”, designing this hat for Jet Bussemaker, who was the Rector of ‘his’ HvA, the Amsterdam University of Applied Sciences, before she joined the Cabinet. “It was basically the first hat I designed, because I do men’s clothes normally. So for me it was very interesting to do this kind of thing, especially now it’s all in the news.”

For inspiration for the hat the Education minister will wear today at the festive ‘Prinsjesdag’, the formal Budget Presentation and Speech from the Throne of the new King of the Netherlands, Sebastian Pleus worked together with hat maker Evelien Gentis-Smit. In this he tried to capture the main characteristics of Jet Bussemaker. “Google was a great help. I wanted the hat to reflect her whole appearance, what kind of position she’s in. I think she is an indenpendent and strong woman. I got my inspiration from the hats of women of the Twenties and wanted the colors of the hat to match the color of her eyes.” 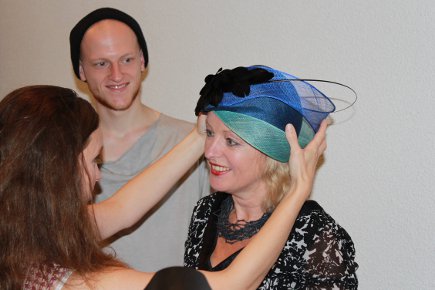 Pleus got a lot of attention in the media and this really surprised him. “I mean, it was a completely new thing for me to do. I’m very curious how everything will look on the day itself, so I’m definitely going to look at the whole official ceremony.”

After designing the hat of minister Bussemaker, Sebastian does not know yet what will be next. Would he like to design the hat of Queen Maxima next year for this special day? “That would be huge. I think I would say yes. But I would actually be very frightened to get that responsibility. I mean, designing for a minister, I was kind of afraid, but for the Queen…… That’s massive.”

Today when the Dutch government presents its National Budget, Jet Bussemaker will by the way not be the only politician wearing a hat designed by a student. PvdA Members of Parliament Tanja Jadnanansing and Loes Ypma will wear a hat that is designed by students from the HMC College studying for Creative Craftsman. And VVD-member Anne-Wil Lucas will bring a 3D-printed hat to the official festivities to emphasize her passion for innovation and R&D. Can evolution be predicted?

Evolution in very large populations can be predicted far...

May the future be orange!

I've heard professors at Berkeley talk about Europe and...